Give those fingers some room to breath

Nintendo has historically done its own thing when it comes to controllers. As far back as the Nintendo 64, with its unique perspective on two left halves of a controller, there hasn't been any concrete format or design philosophy that Nintendo consoles have adhered to. While playing your Nintendo Switch docked you do have options like the Pro-Controller to get away from the Joy-Cons, but there's no official way to get away from the handheld format of undocked Joy-Cons. The Switch Handheld Grip Controller from Oivo seeks to pair the on-the-go handheld mode of the Nintendo Switch, with the form factor and comfort of a full-sized controller, but just how well does that work in practice?

How does it look?

The first thing that you'll take away from looking at the OIVO Switch Handheld Grip Controller is that it's large. A Nintendo Switch with Joy-Cons attached is about 9.5 inches (24 cm) but once docked in the Grip Controller it extends up to 12 inches (30 cm). As is expected with the larger palm grips, it also triples the width of the Switch. Even after playing with the Handheld Grip Controller for a week I'll still see it across the room on my coffee table and think "wow, this thing is monstrous" but the effect has definitely been wearing off as I've been getting used to its look. The controller's button layout features the same offset thumbstick as the Nintendo Switch Pro Controller and the Xbox, and will fit your hand much more comfortably than Joy-Cons will. If you find even the Pro Controller a bit cramped then the larger grooved grip on the Handheld Grip Controller will probably be a welcome change. 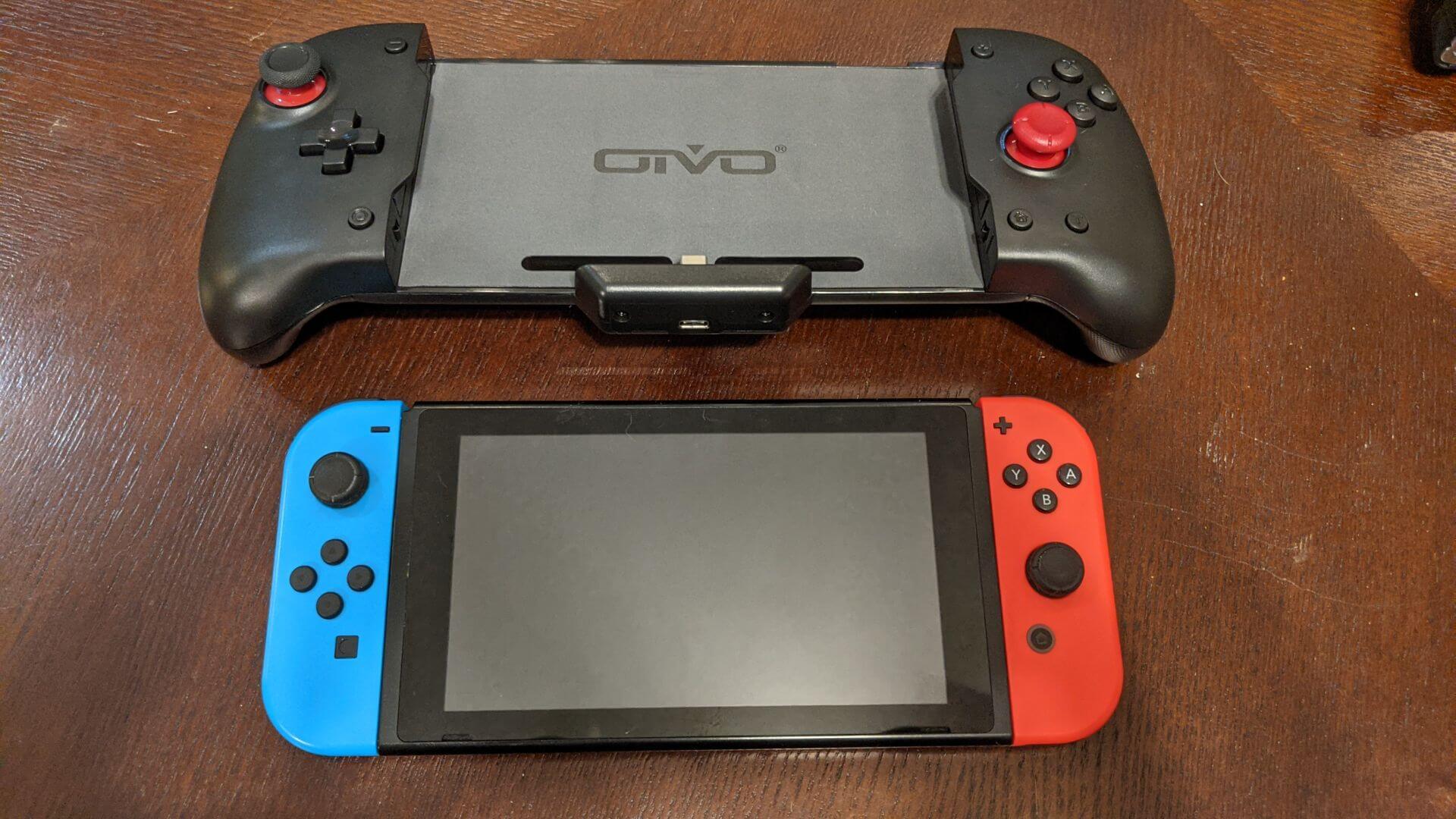 Does this grip make me look fat?

The controller features a simplistic color scheme, all black, but has some striking color pops with a red right thumbstick, and red on the stalk of the left thumbstick. It's not enough to be screaming out for attention but adds something that a completely black color scheme would be missing. Sliding the Switch into place on the controller it's impossible not to see the effort that has gone into not just making a comfortable controller but also in the care of your Switch. This is a wired controller so your Switch will slide in from the top, against the resistive felt backing, and underneath the plastic teeth on either side and slot directly into the USB-C port at the bottom. With how firmly structured the frame is for your Switch, there's no danger in damaging either the controller's plug or the port on your console.

One slightly negative part about the look of the build is how a controller naturally rests in your hands. When holding a normal Switch Pro Controller the face of it doesn't look towards you, but angles up slightly. When using a controller and looking at a screen this isn't a worry, but playing with the Switch Handheld Grip Controller does mean the Switch screen will also angle up slightly. I did find myself subconsciously tilting my wrists further up while playing to compensate for this change in angle.

How does it feel?

Picking the controller up the first thing to notice is that while it's quite a bit larger, it's an extremely light accessory weighing only a little bit more than the stock Joy-Cons themselves. Grabbing onto the controller and feeling the textured grips and putting your thumbs on each stick is extremely comfortable for someone with bigger hands. There's no need to curl in your fingers in a spiderlike grip like is needed for the Joy-cons. The left thumbstick has a concave design that's smooth in the middle with a coarse texture around the side and the right stick comes with easily swappable thumbstick caps. There's a small nub, concave, and convex designs to fit your preferred style. I personally immediately swapped it for a concave design for added grip. The concave thumbstick was definitely appreciated in some more intense rounds of Super Smash Bros. 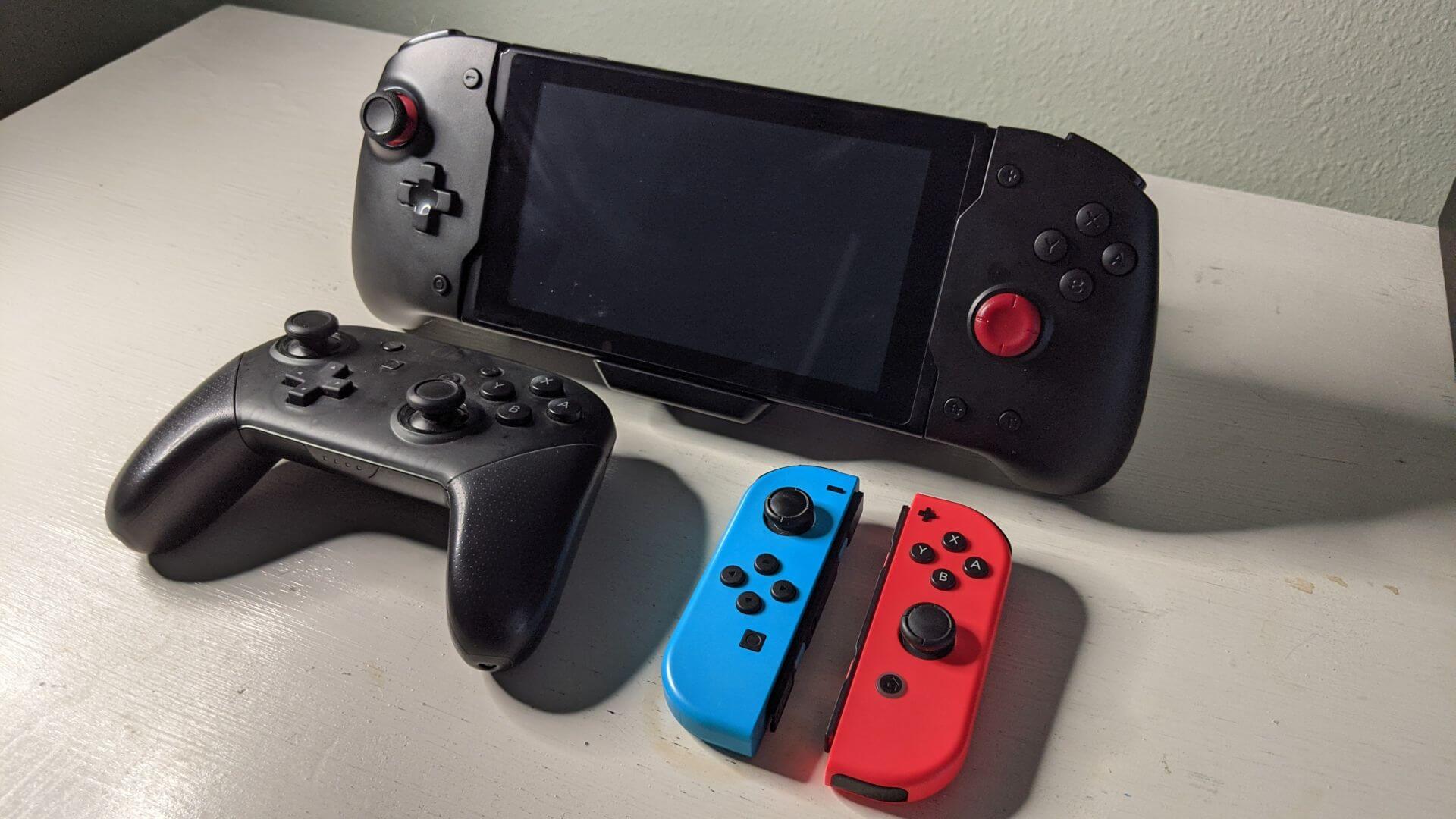 Being a wired grip controller does have the added benefit of not needing to worry about wireless controller latency, nor do you need to worry about battery life. Using this extra-large controller won't apply any additional drain on your battery than using the Joy-Cons would. The downside of using a wired Pro Controller, as the Switch sees it, is that you can't use any functionality such as scanning amiibo. Depending on your frequency of amiibo usage, this might be a make or break function for you.

The face buttons on the Switch Handheld Grip Controller have a number of feels to them. The d-pad is extremely clicky but does require you to apply some pressure for it to work. It's a combined d-pad with a slight dip in the center almost working better as a makeshift thumbstick than an actual d-pad. For short stints playing NES or SNES games, it's workable, but prolonged play rapidly becomes less and less comfortable. The ABXY face buttons have a nicer mushier feel, much closer to the official Nintendo Switch Pro Controller. The rest of the buttons, like the screenshot and home key, feel much closer to their joy-con counterparts. Whether this kind of feel is what you enjoy, or tend to avoid in a controller, is much more a matter of personal preference, but d-pad aside the button feel was in line with what I personally enjoy from a controller.

The first time you connect your Switch to the OIVO Switch Handheld Grip Controller you'll need to enable Wired Pro Controller support in settings. You can find this by going to System Settings > Controllers and Settings > Pro Controller Wired Communications and set it to 'On.'

There's one large aspect that the OIVO Switch Handheld Grip Controller really lagged behind when compared to the official Switch Controllers and that was in its rumble. One of the selling points of the Switch has always been the HD Rumble, and the OIVO Switch Handheld Grip Controller simply has two large rumble motors in either grip and that's all. HD Rumble aside, even transitioning from an Xbox One controller's Haptic Triggers to the OIVO Switch Handheld Grip Controller feels like stepping back to the days of the DualShock 2. There also seems to be some kind of balance mismatch between the smaller format rumble of the Joy-Con and how that translates to the larger motor found in the OIVO. With more force behind it, the "100% rumble feel" or walking by a secret is Super Mario Odyssey shakes the whole unit, losing any potential subtlety of the smaller format rumble.

There's a lot that the OIVO Switch Handheld Grip Controller has going for it. Its larger format and well-done buttons promote comfortability for longer play sessions. While at first the larger format did have me questioning whether it could replace my trusty Joy-Cons, it might now be my preferred way to play when in handheld mode. That being said, moving away from the Switch HD Rumble is quite a loss; a less powerful motor might have been the way to go to match experiences. This controller is a great way to enjoy playing the Switch around the house in a much more comfortable way.

The OIVO Switch Handheld Grip Controller was provided by OIVO and is available via website .